Abstract: Confusing selection of cultural traits based on biological fitness (Cultural Selection 1) from the effects of selection based on cultural fitness (Cultural Selection 2) can hinder the integration of adaptive explanations for human behaviour, which focus on biological fitness, and cultural evolution explanations, which often focus on social transmission. Recent empirical work is starting to bridge this gap, but progress in math- ematical modelling has been considerably slower. Here, I suggest that modellers can contribute to achiev- ing this integration by further developing models of Cultural Selection 1, where behaviours are influenced by culturally inherited traits selected on the basis of their effects on biological fitness. These models should build on existing social evolution theory methods and replace genetic relatedness with cultural relatedness, that is the probability that two individuals share a cultural variant.
Sex differences in behaviour in the context of human warfare
The demography of human warfare can drive sex differences in altruism

Abstract: Recent years have seen great interest in the suggestion that between-group aggression and within-group altruism have coevolved. However, these efforts have neglected the possibility that warfare – via its impact on demography – might influence human social behaviours more widely, not just those directly connected to success in war. Moreover, the potential for sex differences in the demography of warfare to translate into sex differences in social behaviour more generally has remained unexplored. Here, we develop a kin-selection model of altruism performed by men and women for the benefit of their groupmates in a population experiencing intergroup conflict. We find that warfare can promote altruistic, helping behaviours as the additional reproductive opportunities winners obtain in defeated groups decrease harmful competition between kin. Furthermore, we find that sex can be a crucial modulator of altruism, with there being a tendency for the sex that competes more intensely with relatives to behave more altruistically and for the sex that competes more intensely with non-relatives in defeated groups to receive more altruism. In addition, there is also a tendency for the less-dispersing sex to both give and receive more altruism. We discuss implications for our understanding of observed sex differences in cooperation in human societies. 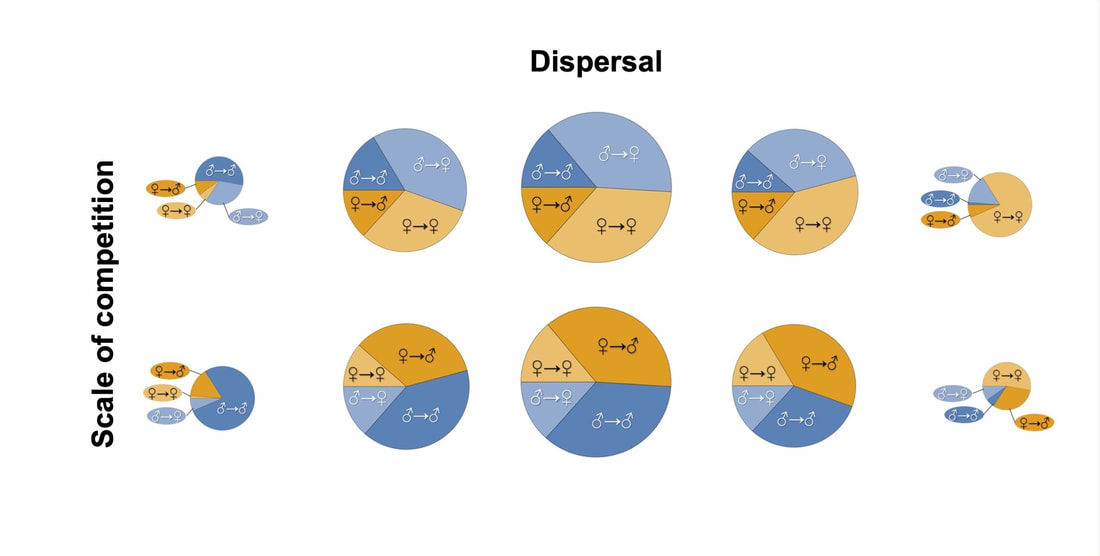 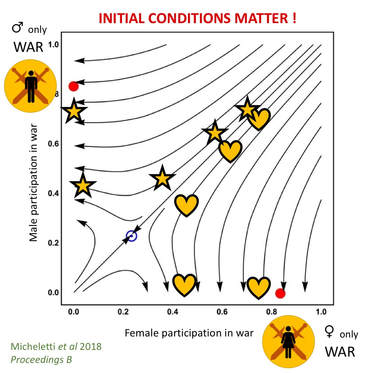 Why war is a man's game

Paper: Micheletti, Ruxton & Gardner (2018) Proceedings B​
​University press release
Click for video animation (on Twitter)
Abstract: Interest in the evolutionary origins and drivers of warfare in ancient and contemporary small-scale human societies has greatly increased in the last decade, and has been particularly spurred by exciting archaeological discoveries that suggest our ancestors led more violent lives than previously documented. However, the striking observation that warfare is an almost-exclusively male activity remains unexplained. Three general hypotheses have been proposed, concerning greater male effectiveness in warfare, lower male costs, and patrilocality. But while each of these factors might explain why warfare is more common in men, they do not convincingly explain why women almost never participate. Here, we develop a mathematical model to formally assess these hypotheses. Surprisingly, we find that exclusively-male warfare may evolve even in the absence of any such sex differences, though sex biases in these parameters can make this evolutionary outcome more likely. The qualitative observation that participation in warfare is almost-exclusive to one sex is ultimately explained by the fundamentally sex-specific nature of Darwinian competition – in fitness terms, men compete with men and women with women. These results reveal a potentially key role for ancestral conditions in shaping our species’ patterns of sexual division of labour and violence-related adaptations and behavioural disorders.
Featured in:                                     Why war evolved to be...                                         Wars were traditionally fought...
Why war is a man's...                                 War may have...                  Why war evolved to be...
Conflicts of interest in the context of human warfare 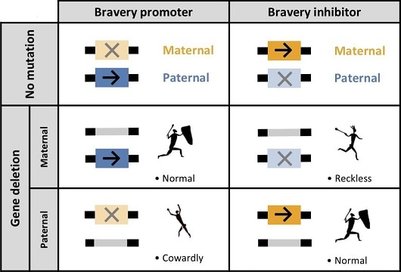 Abstract: Recent years have seen an explosion of multidisciplinary interest in ancient human warfare. Theory has emphasised a key role for kin-selected cooperation, modulated by sex-specific demography, in explaining intergroup violence. However, conflicts of interest remain a relatively underexplored factor in the evolutionary-ecological study of warfare, with little consideration given to which parties influence the decision to go to war and how their motivation may differ. We develop a mathematical model to investigate the interplay between sex-specific demography and human warfare, showing that: the ecology of warfare drives the evolution of sex-biased dispersal; sex-biased dispersal modulates intrafamily and intragenomic conflicts in relation to warfare; intragenomic conflict drives parent-of-origin-specific patterns of gene expression – i.e. “genomic imprinting” – in relation to warfare phenotypes; and an ecological perspective of conflicts at the levels of the gene, individual and social group yields novel predictions as to pathologies associated with mutations and epimutations at loci underpinning human violence.

​
Senior Honours Project, BSc(Hons) Evolutionary biology​  -  Supervisor: Dr Chris Templeton
In particular, I was interested in understanding if and how mobbing calls produced by adult blue tits (Cyanistes caeruleus) encode information about the predator being mobbed. In order to address these questions, I performed “predator presentation experiments” in which I positioned a stuffed predator close to a Blue tit nest and recorded calls and behaviour (see photos below).